#1 - May 3, 1999...Tornadoes (2)...C.Oklahoma...F5 at close range near Bridge Creek OK and as it moved into Moore OK...unbelievable F5 tornado damage...I chased solo this day, but eventually met up with Jeff Piotrowski...helped put together the documentary " Terror in the Heartland" with Jeff later in 1999.

#3 June 8, 1995...Tornadoes (6)...Texas Panhandle...caught the full lifespan of a large tornado in a remote area of Roberts Co. TX...the large tornado started off as a classic egg-beater structured tornado northwest of Miami and grew to a 1/2 mile wide monster as it tracked northwest...saw various other tornadoes including the late innings of the monster Allison TX tornado...a spectacular Texas Panhandle tornado outbreak...chased with Mike Morgan

#4 May 4, 2003...Tornadoes (3)...SW Missouri...watched the very violent "Franklin" KS tornado move into Barton Co. MO and then rope out near the town of Liberal...dropped south and watched the Carl Junction MO F3...and then headed east catching a distant glimpse of the F3 tornado that struck the town of Battlefield...chased with Rich Thies

#5 September 22, 2001...Tornadoes (1)...C.Nebraska...the F3 tornado which almost claimed my life made for certainly the most intense/scariest chase I could have ever possibly imagined...somehow outraced the 1/2 mile wide tornado to barely get to shelter in a nearby farmhouse...rode out the large tornado northeast of Edgar NE as the house above us got nailed and the remainder of the farm was completely wiped out. I chased with Jeff Piotrowski and was lucky to beat a 1/2 mile wide tornado in a foot race !!

#6 April 9, 1999...Tornadoes (2)...SW/C Iowa...this was probably the fastest paced chase of my career so far...watched much of the lifecycle of a long-tracked wedge F4 tornado as it barreled across the Iowa countryside from near Carbon to beyond Greenfield IA...after this one ended...caught yet another fast moving tornado (F3) near Winterset IA which moved to just beyond I-80 before dissipating. Nearly caught several other tornadoes along and south of the I-80 corridor.

#7 - #10 will be published shortly...have some tough decisions to make

Pike Co. GA claims the year's first F3 tornado Monday Jan. 2nd at 5:05pm EST...the tornado was 1/4 mile wide...and had a 3 mile long damage path near the town of Hollonville. It damaged/destroyed several homes and injured 3 persons. Other F2 tornadoes also were reported in Kentucky near Louisville and in Georgia south of Atlanta. Monday was also the first Moderate Risk and PDS Tornado Watch of 2006. 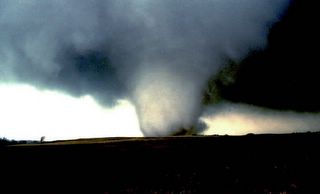 From the archives: Just northwest of Carbon IA (April 8, 1999)..this F4 tornado would soon level a 2 story farmhouse. This was a fantastic chase I had with Jeff Piotrowski. Photo is copyrighted Storm Productions Inc. Owasso OK

I am a veteran storm chaser of many supercells, motherships, nuclear bombs, wedges, naders, tubes, tornadoes, stovepipes, cones, twisters, fingers of god; 3 tornadoes stand out among the others...the May 17th 2000 Brady Nebraska F3...the Sept. 22nd 2001 Edgar Nebraska F3... and of course the May 3rd 1999 Oklahoma F5